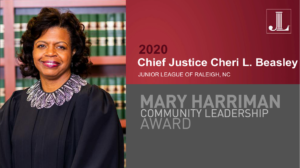 Chief Justice Cheri Beasley is the recipient of the 2020 Mary Harriman Community Leadership Award from The Association of Junior Leagues, International. She formally accepted the award at the AJLI virtual fall conference on Oct. 23.

Chief Justice Beasley is honored as “an exemplary public servant,” according to AJLI, “who credits the relationships and leadership positions held during her active years in the Junior League of Fayetteville, N.C., as the launching pad for her judicial career.”

Now a sustaining member of the Junior League of Raleigh, she transferred her membership while serving as an associate justice.

The award announcement praised the Chief Justice’s warm and humble servant leadership, and her belief in a fair and independent judiciary while using her platform to better the lives of all North Carolinians, “through engaging school systems, law enforcement, faith leaders and other stakeholders in discussions about community issues.”

Beasley was appointed to the role of chief justice in March after serving on the state’s highest court since 2012. She is the first African-American woman to serve in the role.