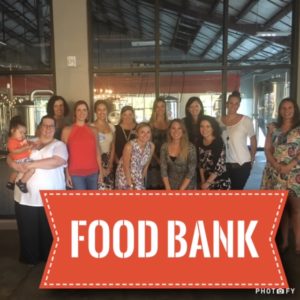 The mission of the Food Bank of Central & Eastern North Carolina: No One Goes Hungry in Central & Eastern North Carolina.  A non-profit organization established in 1980, the Food Bank has provided food for people at risk of hunger in a 34 county service area for over 35 years.  The Food Bank serves a network of more than 800 partner agencies such as soup kitchens, food pantries, shelters and programs for children and adults through 6 branches in Raleigh, Durham, Greenville, New Bern, Sandhills (Southern Pines) and Wilmington.

Since 2016, the JLR has partnered with the Food Bank of Central & Eastern North Carolina to serve a large population of people who struggle to access nutritious and adequate amounts of food necessary for a healthy and active lifestyle.  The JLR team partners with the Food Bank to further its mission of receiving and distributing as much food as possible, by organizing fresh food so that it can be distributed to the community in an efficient and timely manner.  The Food Bank and our JLR volunteers are committed to addressing food insecurity that remains a serious problem in central and eastern North Carolina.