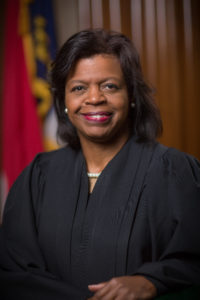 On March 7,  Cheri Beasley answered the call to become the first African-American woman to serve as Chief Justice of the N.C. Supreme Court. In our state’s history, she is only the fourth woman to hold that position. In our nation’s history, only three other African-American women have ever served as Chief Justice of a state court system, and only one other currently serves in the role.

In addition to a lifetime of public service within the judicial system and her recent appointment by Governor Roy Cooper, Beasley serves in her church leadership, mentors young people and is a Sustainer in the Junior League of Raleigh.

From an early age, her mother, Dr. Lou Beasley, instilled the importance of service. She takes seriously the role of cultivating the best in people, whether it is a young person she mentors or someone she encounters through her work at the Supreme Court.

“People find themselves in different situations, but regardless they all share the same hopes and fears,” she said. “We have to find the humanity in all of us; crime affects other people’s lives, and we have to keep that perspective” in the courtroom.

She notes the need for resolution, which is why people turn to the courts and rely on those elected to serve in the halls of justice. She rejects the notion that politics is a driver in the judicial system, and instead, she focuses on fairness in her work as North Carolina’s Chief Justice and top administrator for our state’s Judicial Branch.

She speaks proudly of her time in the League, beginning in Fayetteville in the early 1990s and then later transferring to the Raleigh League as a Sustainer. Throughout our state’s appellate system, she notes, there are many women who are judicial leaders as well as League members. She confidently states that the reach of the Junior League extends far beyond Wake County and that hours spent and dollars invested cannot tell the full story of the breadth of the service our League provides to the state of North Carolina.

Beasley’s humility, patience and optimism shine through immediately when you talk with her. Optimism exudes when she talks about the generation maturing now, noting that our world is in good hands.

“Young people are wonderfully creative, smart and innovative. They think differently from the previous generation,” she said. “It is refreshing to watch them step up and see their fresh contributions.”

Her sons hold a special place in her life. Though grown and college-aged, she feels the tug of a mama bear when asked about her boys with the beaming smiles. She hopes that the call to service continues to that generation coming up, and her example is a model for all of us to shine light and lead without relenting in all that we do to serve our community.